Objective: The authors present a small case series of posttraumatic and cancer patients with partial-thickness skull wounds (exposed outer cortex and no periosteum), with wounds greater than 60 cm2, that were completely healed in less than 6 weeks in an outpatient setting.

Materials and Methods/Results: Posttraumatic or oncologic resection was performed in the operating room with a bone burr to prepare the skull. Acellular matrix powder was applied in a slurry of hydrogel, covered with aceullar dermal matrix sheets, and affixed with a self-contained dressing consisting of petroleum fine mesh gauze, dry coarse mesh gauze, and oil emulsion dressing under stapled tension. Patients returned 1 week later to an office setting for reapplicaton of acellular matrix powder in the hydrogel slurry if indicated. Split-thickness skin grafting was performed again in an outpatient setting when adequate granulation tissue was clinically evident. A similar bolster dressing was used as graft fixation and the patient discharged on the day of skin grafting. Graft adherence was assessed at weekly postoperative intervals. Healing was complete within 6 weeks of the original resection in 66% of the cases and would have been possible had oncologic treatment not delayed the grafting.

Conclusions: Free tissue transfer is often thought to be necessary in patients undergoing radiation treatment because of the vascularity associated with the reconstruction. Oncologic patients treated with this method tolerated postoperative radiation therapy when indicated. The authors have adopted this technique in lieu of free tissue transfer as a cost-effective outpatient method for treating this complex patient cohort.

To view more posters, visit the Wound Care Learning Network or see them in person at the next SAWC meeting. 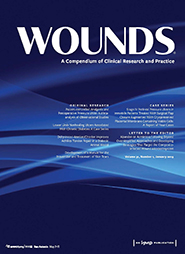